Gum disease or periodontal disease is a common dental problem among adults. In fact, the Center for Disease Control and Prevention (CDC) estimates that nearly half of Americans over the age of thirty are affected by some form of gum disease.

In many cases, gum disease can be caused by inflammation of the gum, a condition known as gingivitis. Even though gingivitis is less serious than a gum disease, it needs to be treated to maintain healthy teeth. Gum disease, on the other hand, causes much more damage to the teeth and their surroundings, such as bleeding sore gums, decaying of the jaw, and even leading to the teeth falling out completely.

Gum disease is a serious condition which has many downsides. As the disease gets more severe, it not only affects a person’s oral health, but it can even begin to affect their overall health of the body.

Why and how would gum disease impact overall health? As the gums continue to deteriorate by being filled up with bacteria, the body as a whole begins to suffer. Thus, one becomes more susceptible to developing heart problems and the body’s ability to control blood sugar decreases to a great extent. So, it is not simply a matter of losing a few teeth.

Traditionally, gum diseases used to be treated via the means of scaling and root planing. With scaling, the dentist would remove all the visible plaques from the teeth, especially those which amass at the roots of the teeth. For root planing, the dentist would numb the roots of the teeth in order to clean the pockets between the teeth and gums so that all the bacteria which cause periodontal disease can be removed. 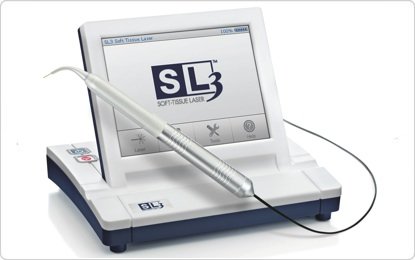 Today, dentists have opted for laser therapy over the traditional methods of treating gum diseases. These new and innovative modern techniques are quicker, less painful, minimize swelling and bleeding, and reduce post-surgery discomfort.

The latest addition to the field of laser therapy is the emergence of the product known as the SL3® Diode Laser.

The SL3® Diode Laser is used as a less invasive medium for oral soft tissue surgery. It can be utilized for a wide range of dental procedures, including but not limited to:

The SL3® Diode Laser works by using laser energy produced using Gallium, Aluminum, Arsenic as the active medium and directing it via the means of an optical fiber cable to the removable fiber tips. This process makes it a handy, versatile, and accurate tool.

It comes with a battery operated foot pedal which controls the laser output. By pressing down the pedal, the laser is activated and by removing the pressure, the laser will stop. It is also used for the treatment of lesser but more common problems such as cold sores and mouth ulcers (aphthous ulcers).

If you are suffering from gingivitis, gum disease, or any other dental condition, it is highly recommended that you schedule an appointment with Dr. Alessandra Raschkovsky. She is an expert in the field of dentistry with more than a decade’s worth of experience behind herself and her team. With Dr. Raschkovsky, you will be pleased to know that you are in capable and experienced hands.